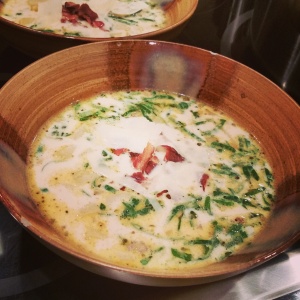 So, we really like soup during the winter. One of my husbands favorites is to go to Olive Garden and have the “Soup, Salad, and breadsticks” for lunches or dinners. The problem is, you can’t do it too often because of 1-calories, 2-cost… you gotta tip too! So, I’ve been looking up recipes for some of the dishes… and soups were my first stop! Soups seem to be pretty easy for me to try and recreate. And… so far, are turning out AWESOME!

This is my take on the Copy-Cat Zuppa Toscana. The only change I could recommend, is to possibly use kale instead of spinach, especially if you are going to freeze and reheat, it will hold up MUCH better than baby spinach!

ENJOY!!! It’s a good one! This one had the saltiness and spice of the bacon and sausage combined with the creaminess of the half&half and the crunch of that baby spinach… mmmm!!!! If you put kale in as a substitute, that would add such a good texture as well! AMAZING! Saving this one for sure! 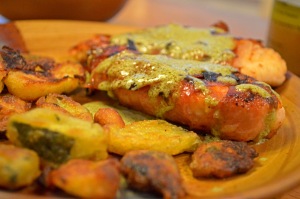 So I had absolutely no clue what I was going to make… I looked at my planned meals, and I had not thawed ANY of the meat that I was going to make… WOOPS! So, then I noticed that I had prosciutto left over from a couple of weeks ago that I hadn’t used… and some extra frozen chicken tenderloins,…. voila! DINNER! I also had a bag of Trader Joes zucchini fries and some lettuce… higher in fat, but making the portions smaller definitely helps with overall calories. This dinner, my portions, was right around 550 calories. I used chicken tenderloins though… a lot of people would opt for an entire chicken breast… which would require more prosciutto wrapped around it… smaller = lower calories!

Ok, so here’s my process:

It was absolutely delicious and spilling over with flavor! To me, completely satisfying and filling. The guys at my table may have preferred another couple pieces of chicken… but then again who wouldn’t when it’s wrapped in bacon, right? 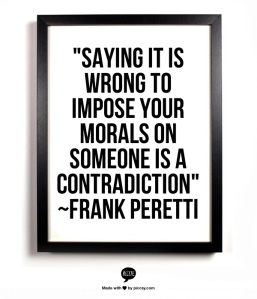