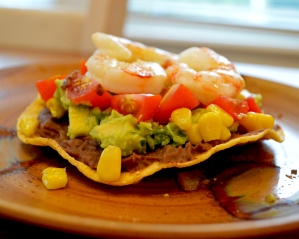 These tostados were on my list since I saw them. I changed a few things, so now, the recipe is mine!! 🙂 I needed something pretty quick, but realized I was out of refried beans…. so, I made some out of canned black beans!!!

Refried Black Beans Directions:
Put oil and onion and cumin into sauce pan and stir and simmer until onions start to become translucent. In the mean time, rinse the can of black beans until all of the liquid that it is canned in is gone. I usually do this in a colander. Then, take the black beans and the vegetable broth, and put into a blender, or like me, the nutribullet. Blend until smooth. Then, add into the sauce pan with the onion and oil blend. Stir, and add the butter and garlic. Let simmer until cooked down and thick and able to “pull” from the bottom of the pan. 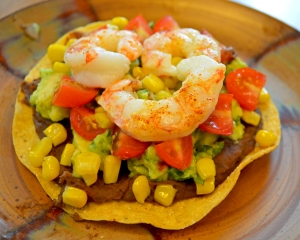 8-10 shrimp
2-3 TB olive oil (or similar oil)
1/4 tsp cayenne pepper
1/2 tsp garlic salt
ground black pepper
Place shrimp into a bowl and drizzle with olive oil. Then sprinkle on the spices and toss. Place onto tin-foil lined cookie sheet and bake at 350 degrees for 12 minutes. (This is for medium sized shrimp, you want to cook until no longer translucent).

I bought the corn tostadas. Place on a plate. Refried beans first, then guacamole, then the corn, tomatoes, then shrimp. ENJOY!!!!!! 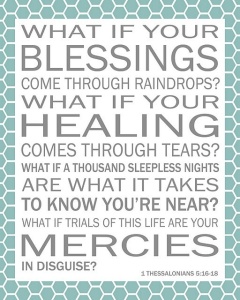